The second week was different from the first. But then that’s life isn’t it? I still made it to the farmers’ market so that was a success! Chatting with the people who produce the food you eat and feed your loved ones is such a great experience.

I tend to eat the same thing for breakfast throughout the season. To that end I picked up some more apples from Saratoga Apple. Macouns for me and Cortlands for the hubby. Looking for something fun to do with the kids? Try an apple tasting. They really are different in flavors and textures. My late fall/winter breakfast is Green Mountain Creamery (Hannaford) yogurt, apples and/or dried fruit, ground flaxseed, and walnuts and almonds. The yogurt and apple are produced within 100 miles. One morning this week I treated myself to egg, bacon, and toast. The eggs are from a farm in Argyle that I get at the Queensbury Hannaford.  The toast is from Heidelberg Bread company which is in Frankport NY – 72 miles away and I buy it at Hannaford. The bacon is not local. I start my mornings off well which is a good feeling. 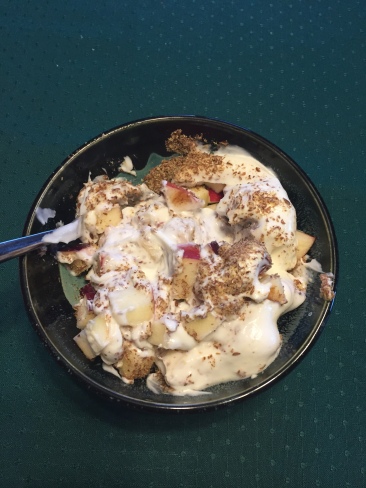 Lunch was a different story. Friday was the only 100 mile diet fare day. I made a black bean, corn, avocado, and onion salsa to eat for lunch at work during the week. Only the onion was local. Tuesday I was out for lunch with family. We chose a family run restaurant but that is as “local” as it got. Friday was leftovers from dinner and that was 100 mile diet fare. In order to stay focused on a goal, it is important to focus on the successes and not the failures. So onward to dinner!

Dinner on Wednesday and Thursday was 100% 100 mile diet fare. I bought chicken, fennel, and parsnips for myself and lamb stew fixings for hubby. All of it was from the farmers’ market. I cut up the fennel and parsnips, tossed them with some olive oil, salt and pepper and they went in the oven with the chicken. The fennel was in the oven for a little less time than the parsnips 30 minutes vs an hour. For Thursday’s dinner, I heated a little locally produced maple syrup in a pan and tossed the parsnips with it just for something different to go alongside the leftover chicken and fennel. Easy and healthy. Truth be told, I prefer raw fennel so next time I will take the longer route and make fennel slaw instead of roasting it. My husband made himself a lamb stew with fingerling potatoes and multi colored carrots in the crock pot. He had that for 2 nights and one lunch.

All in all, I feel successful because I continued to work toward my goal. I’m on vacation next week so I’ll just focus on eating mindfully for the week.

Make the dressing by mixing everything but the fennel to your specifications. I like a 3 to 1 ratio mayo to vinegar but you and your family might prefer 1 to 1. I just add a squirt of Dijon mustard for a little extra something and salt and pepper to taste. Toss with the fennel. Make it ahead and refrigerate to marinate or serve right away.